Opening of the 4th Congress of United Cities and Local Governments 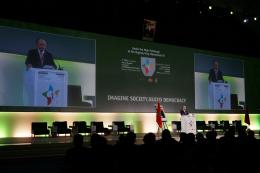 The World Summit of Local and Regional Leaders, 4th UCLG Congress opened on Tuesday as work began on the theme: “Imagine Society, Build Democracy” at the invitation of the Mayor of Rabat, and under the high patronage of His Highness King Mohammed VI.

During the opening Summit, the Mayor of Rabat, Fathallah Oualalou read a message from his Majesty the King of Morocco: “my country also supports all initiatives upholding the principles of decentralisation and local democracy, which are a legitimate demand shared by all nations.”

The Mayor of Rabat, Fathallah Oualalou, also spoke of the honour of hosting this World Summit, reaffirming that “the African elected representatives must play a significant role on African continental development.” He also highlighted the importance as this UCLG meeting constitutes a perfect occasion to demonstrate the African experience and learn from other proven models. As elected representatives, we should play a key role in development and contributing to overcome difficulties and challenges for African continent.”

The President of United Cities and Local Governments and Mayor of Istanbul, Kadir Topbas, affirmed that, “the new international agenda, which we consider our own, will need to recognize the local and regional governments as specific spheres of governance and as essential actors in the development scene. (…) The world citizens are asking for action at global and local levels. I am deeply convinced that together we can make a difference building a future of dignity that we all want regardless of the place where we are born, regardless of our believes or gender.”

Key international figures expressed their complete support for towns, cities and local authorities throughout the world during the opening ceremony. Joan Clos, Executive Director of UN-Habitat highlighted the major stakes for the future of cities and “the importance of local governments in the Post-2015 agenda. The Rio+20 declaration is a step forward to obtaining this recognition.”  He also declared that local governments are “the origin of community participation and local democracy”.

The opening ceremony was followed by the Official celebration of the Centenary of the International Municipal Movement. This was an occasion to pay homage to the pioneers of the movement and the founding presidents of UCLG: Alan Lloyd, former President of IULA and Mercedes Bresso, former President of the FMCU-UTO, but also Daby Diagne, Former President of UTO, Badredine Senoussi, Former Secretary General of the Union of African Towns. Special homage was also paid to the co-presidents Muchadeyi Masunda, Mayor of Harere, Zimbabwe, Khalifa Sall, Mayor of Dakar, Senegal, President of UCLG Africa, Wolfgang Schuster, Regional Councillor of Stuttgart, Germany, President of CEMR, Ted Ellis, Mayor of Bluffton, Treasury of UCLG, and the Mayor of Paris and former President of UCLG, Bertrand Delanoë, that recognises the role played by Mayors in promoting peace, quoting the example of the Ivory Coast given the numerous conflicts the country have faced. “Our towns and cities should meet the needs of citizens, and UCLG must set its ambitions on addressing all the questions raised by urban development” added Mr. Delanoë, founding figure of this large scale gathering of local elected representatives in the early 2000s.

Following the opening ceremony, work began on the first plenary session on the topic: “Imagine Society, Build Democracy: Tackling the major challenges of our era from our cities and regions".

Roger Myerson, Nobel Laureate for Economy and lecturer at the University of Chicago, introduced and participated in the Introductory Plenary session by argueing that "broader understanding of the benefits of democratic local government, we can truly imagine a world in which people everywhere can trust their local and national leaders to provide the public goods and services that are essential for the welfare and prosperity of their communities." (Read here the complete speech.)

Among the many speakers who will take part throughout this summit, the Vice Presidents of UCLG, the Mayor of Guangzhou, Lisbon and Kazan and Mayors of cities and Presidents of Regions working towards the global future of our world: Barcelona, Bamako, Bethlehem, Bordeaux, Bogota, Dakar, Casablanca, Cologne, Guangzhou, Lyon, Naplouse, Nantes, Paris, Quito, Rio de Janeiro, Sao Paulo, Santiago, Stuttgart, Tunis, Vancouver, to mention but a few, in addition to the high representatives of the United Nations and civil society organisations.

During the three days of intense debates and exchanges, numerous representatives from towns, cities, regions and local government associations will address the essential issues faced by towns, cities, regions and their populations: how to foster wellbeing, managing diversity, new governance and the dynamics of change and solidarity among territories. The conclusions of these debates and plenary session in Rabat will be crucial in defining the joint position that local and regional governments will adopt before their citizens and the international community.

This second World Summit of Local and Regional Leaders will be the occasion for participants to adopt a declaration and send a message to the international community outlining their recommendations for the city ready to meet the challenges of tomorrow.

As the Fourth Congress of UCLG, the Summit also represents a new chapter for the world organization created in 2004 that will elect during the Congress a new presidency and adopt the action framework and new priorities for the coming three years.

Fourth UCLG Congress, the Summit also represents a new chapter pour the World Organization founded in 2004, that will see the renewal elections of the Presidency, and will adopt the framework action and the new priorities for the coming three years.

The UCLG Congress, that takes places every three years, is a unique occasion for Mayors and local and regional elected representatives to come together and exchange with actors from the private sector and the international institutions. It is also an occasion for members to elect the governing bodies and for the Presidency to collectively examine important questions and establish the global agenda for the three coming years and beyond. Under the theme, Imagine Society, Build Democracy”, the 4th Congress, hosted by the city of Rabat, Morocco, featured participation by almost 3000 attendees from 120 countries who assisted in the specialist debates on all issues linked to local and regional governments.

Four thematic round tables were organised on the following issues: Fostering wellbeing, strengthening solidarity among territories, supporting new governance and the dynamics of change and promoting diversity. Furthermore, 2 plenary sessions were dedicated to the definition of the strategy of towns, city and region organizations in the framework of the preparation for Habitat III and the Post-2015 Development Agenda. 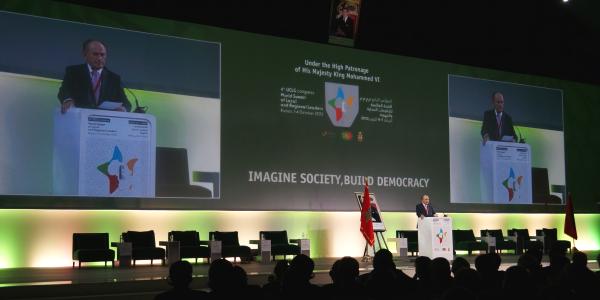