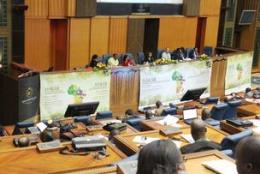 Over 300 UCLG members from over 40 countriesgathered at the UCLG World Council, held in Dakar (Senegal) from 4th to 6th December 2012, at the kind invitation of Mayor Khalifa Sall and UCLGA.

Local and regional leaders focused on discussing the impact of local and regional government’s daily work in development and called UCLG to work to ensure that this message is convened to the international community in the preparations of the new Millennium Development Goals and Habitat III.   Basic services, equality, local development have been identified as areas where Local and Regional Authorities are key actors if we want to improve the quality of life of communities.

The UCLG membership recalled that the New Urban Agenda should be based on four key pillars: new methods of partnership between central and local governments in order to regulate the urbanization and metropolization processes; supporting innovation and economic development of towns and cities in order to improve the quality of public services; the promotion of strategic urban planning and resilient towns and cities; the engagement of citizens in local decisions.  Special emphasis was put in improving the life of women and empowering them as motors of development.

Members of the World Organization furthermore committed to participate in the 4th UCLG World Congress,Summit of Local and Regional Leaders to take place in Rabat from 1st to 4th October 2013. Imagine Society, Build Democracy will be the red line of a gathering that should be inclusive and open to all partners and sister organizations.  Fathallah Oualalou Mayor of Rabat (Morocco), stressed the desire of his city to facilitate dialogue and exchange that should contribute to a peaceful future for all. UCLG members requested the agenda of the Congress to include strong accent on Culture as fourth pillar of sustainability and gender equality.

The President of UCLG, Kadir Topbas, Mayor of Istanbul, recalled his determination to have the voice of local and regional authorities heard in the international development agenda, and to follow the mandate and aspirations of UCLG to facilitate the diversity of local and regional voices to enrich the international agenda in particular through the High Level Panel of the United Nations. “The Post-2015 Agenda is critical for our Organization, but also for the citizens that we serve”.

“The Habitat III Conference will be a decisive moment that should recognize the maturity of our movement at global level,” he concluded.

Joan Clos, Under Secretary General of the UN, stressed the need to pay attention to medium size cities in middle income countries which are rapidly growing and being the target of many of the urban challenges.

The UCLG leadership welcomed the increased participation of Regional Authorities in UCLG through the creation of the Forum of Regions and renewed partnership with ORU-FOGAR aiming at creating a Section of Regions. The World Forum of Regions adopted a Declaration that calls upon all spheres of government to coordinate and contribute to the provision of  basic public services. They further stressed the need to unite to work towards food security, and self-sufficiency of territories.

The UCLG Executive Bureau was chaired by Muchadeyi Masunda, Mayor of Harare (Zimbabwe) who stressed the need to partner with all actors and highlighted the role of local authorities as catalyst of alliances and development.  Wolfgang Schüster, Mayor of Stuttgart (Germany) praised the work carried out by the organization in 2012 and encouraged members to mobilize and get involved next year providing inputs for the Local and Regional Authorities Post-2015.