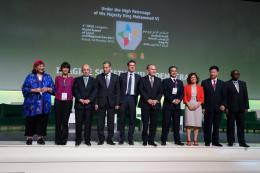 The World Summit of Local and Regional Leaders of UCLG culminated today in Rabat with the announcement of the new Presidency of UCLG – the largest organization of Mayors and local and regional governments in the world. Over these three days, over 3,000 participants from 125 countries came together under the theme, “Imagine Society, Build Democracy”.

Kadir Topbaş, Mayor of Istanbul (Turkey) was reelected President of the organization.

The following co-presidents were elected:

Fathallah Oualalou, Mayor of Rabat (Morocco) was elected as treasurer for UCLG.

Berry Vrbanovic, Councilor of Kitchener (Canada) and Emeritus President of the Federation of Canadian Municipalities (FCM), was nominated deputy treasurer.

Nine Vice-Presidents representing all the regions of the world were also elected. The Assembly General of UCLG welcomed the creation of a new section for the Regions that will be led by ORU-FOGAR.

At the opening of the World Council, Kadir Topbas warmly thanked Fatallah Oualalou, Mayor of Rabat and the Moroccan authorities for their remarkable welcome as well as the African Section of UCLG, UCLG Africa and the members of the Pan-African Council. He then paid special homage to local and regional authorities that have presently become members of this global movement. A special mention was also made for representatives of the United Nations (UN Habitat, UNICEF, UNESCO, OIT, UNDP among many others), the World Bank, the European Commission, the Cities Alliance, the organizations of local governments and the partners from the private sector who also participated in this Summit.

The Declaration recognizes the need to bring innovate changes, to achieve more just societies by reinforcing governance from the bottom up, under the leadership of inclusive local and regional governments. It highlights the role of subnational governments as engines and actors of development and in the promotion of dialogue as a vehicle to peace.

The outcomes of this Congress further celebrate diversity and call for equality and inclusion, with culture and decent jobs as crucial components of resilient sustainable societies.

The Declaration builds on the lessons learned over a 100 years. This centennial has seen many changes and yet the core issues that concern local and regional authorities as the closest level of government to the people remain the same.

Universal service provision that takes care of those most vulnerable in society will need to continue high in our agenda and was included in the document that this Congress adopted.

This Congress clearly calls for a broad understanding of urbanization, bridging the urban rural divide, including cohesion and a special approach based on solidarity and cooperation beyond political borders and administrations.

Making our communities resilient and tackling the unavoidable urbanization process in an efficient manner implies a greater role for local and regional authorities in international policy making, in particular UN processes that define agendas that will affect communities world-wide.

In order to ensure broad ownership, the Declaration has been distributed among members before the Congress.

3rd World Summit will take place in Bogota in 2016

The City of Bogota was chosen to host the 5th World Congress and 3rd Summit of Local and Regional Leaders of UCLG that will take place in 2016.

Please click here to read the Declaration of Rabat. 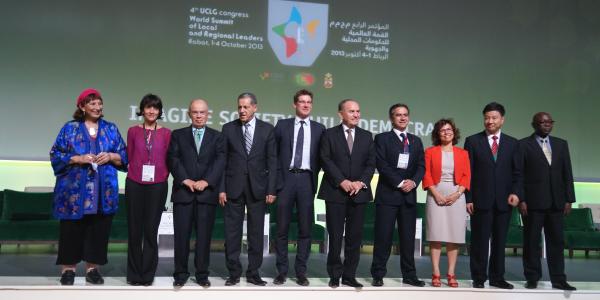